Rigorous attempts have not yet been made to investigate the range of microphysical characteristics of supercell thunderstorms. The overarching goal of this research is to i) deploy mobile disdrometers within supercell thunderstorms during VORTEX2 in 2010, ii) conduct a comprehensive analysis of all disdrometer observations to determine microphysical characteristics in tornadic compared to nontornadic supercell thunderstorms, and iii) relate the results to high-resolution polarimetric Doppler radar observations. Figre 1 shows combined disdrometer and dual-polarization radar measurements during VORTEX2 2009 during the 5 June Goshen County tornado. 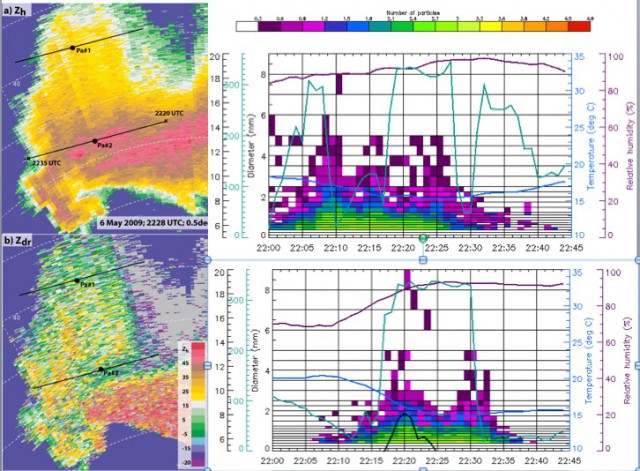 Figure 1: a) Radar reflectivity (Zh in dBZ; color-coded) from the NSSL NOXP radar, b) differential reflectivity (Zdr in dB; color-coded) from the NSSL NOXP radar, and c) PSD (color-coded) from the PARSIVEL disdrometer within the supercell thunderstorm at 2226 UTC on 5 May 2009 producing an EF4 tornado observed during VORTEX2. Location of the disdrometer (Pa#2) at 2226 UTC (solid dot) and transect (black line) of the disdrometer are indicated in a) and b). Radar range rings are drawn every 5 km in a) and b). Temperature (blue line), relative humidity (red line), and wind (direction: turquoise line, speed: black line) measured at the location of Pa#2 is overlaid in b).

The VORTEX2 campaign in May-June 2010 provides a unique opportunity for coordinated disdrometer and polarimetric and dual-Doppler radar measurements within tornadic and nontornadic supercells. During VORTEX2 2010 we will deploy a total of eight mobile disdrometers (see Fig. 2) 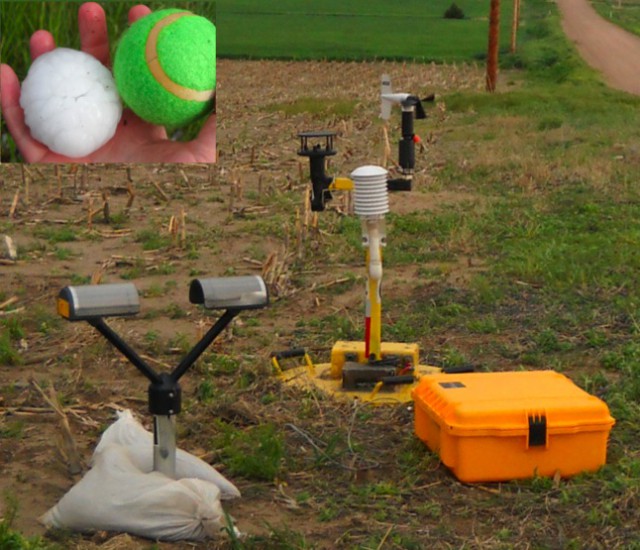 with surface observations using three pick-up trucks (<<visit our blog>>). The objective of a mobile deployment is to observe temporal and spatial variations of drop-size distributions by transecting the same storm several times close to the VORTEX2 radar facilities. To achieve this goal, disdrometers will be placed several minutes ahead of the thunderstorms relative to their translation direction while the thunderstorms pass over the instruments. For fast-moving storms (>30 knots), the fixed laser disdrometer teams will deploy using a picket fence strategy perpendicular to the storm motion in advance of approaching storms (Fig. 3a). For slow-moving storms (< 30 knots), the disdrometers will be relatively closely spaced (0.5-1 km) and deployed in order to sample the connecting region between the hook appendage and the storm core (Fig. 3b). The mobile disdrometer will focus on northeast-southwest transects through the hook appendage, where practical,both just north and just south of the low-level mesocyclone, with the expectation of data collection during westbound transects only (eastbound transects may often lack adequate probe-relative winds for useful measurements). Fixed site deployment lines aligned with the storm motion will also be considered on a case-by-case basis (as road networks and storm motion allows) to sample hook appendage PSD temporal evolution characteristics shown). After the storm passes over the instruments, the mobile disdrometers will be relocated again ahead of the storm, parked, and measurements will be repeated.

While recent analyses of disdrometers and polarimetric radar observations have provided some insights about hydrometeor types within supercell thunderstorms, a comprehensive analysis of a number of cases using high-resolution measurements has yet to be established. The specific objective of the research is to analyze PSD, fall velocity, and surface observations in conjunction with dual-polarization Doppler radar measurements to i) characterize PSD and fall velocities in different areas of the storm and at various lifetimes of supercell thunderstorms, ii) create a PSD-parameter data base for understanding microphysical processes within supercell thunderstorms and evaluating storm-scale numerical model outputs, and iii) studying steady-state and intermittent microphysical processes relevant for ice production and determine the effect of the evaporative cooling between tornadic and nontornadic storms by additionally analyzing 3-dimensional dual-polarization and dual-Doppler radar data.

This effort is supported throught the NSF-AGS 0969172.